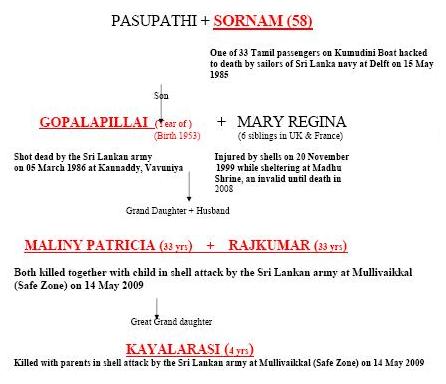 Yes, the world may never know Sri Lankan death toll of its more than half a century old genocide, if worlds top Human Right defenders lacks integrity, will and courage. But the world will know the truth till a single human soul exist in this planet, which believes in justice.

This “War Without Witness” report is based on firsthand information obtained from Government Hospital authorities, Government Officials, Police and Judiciary sources in Vanni and Sri Lanka, The North East Secretariat of Human Rights, Aid workers, Human Rights Activists in Sri Lankan working for leading INGO & NGOs (including UN and ICRC) and primary data gathering exercise amongst exiled Tamil Diaspora (photos and details of some of those Victims).

Ø       Identities/cases ( Photo , Full Name , Date of Birth/Age, Home Town/Native Place) of more than 300 innocent Tamil civilians who have been killed by Sri lankan Armed Forces in 2009 has been documented in this report.

Ø       Identities/cases ( Full Name, Age, Sex , Hospital admitted at ) of more than 19,700 inocent Tamil civilians who have been killed or injured by Sri lankan Armed Forces in 2009 has been documented in this report. (Annex 01 and Annex 02).

Ø       More than 95% of this 20,000, confirmed identities of Victims killed or injured by Sri Lanka Armed Forces occurred in first three month from January to March 2009 and doesn’t include the final stages of the battle described by UN as ‘bloodbath on beaches’ in April and May 2009.

Ø       By end of April and till 20th May death toll estimated by various Human Rights Organisations ( Including UN Local staff ) are around 1000 a day.

Ø       More than 430 Tamil Civilians have died after fledding the war-zone in UN funded detention camps & hospitals, due to Injury, Starvation ( lack of food and medicine ) and diaria. ( Annex 03 )

Ø       A Case documented by War Without Witness confirms the Genocidal War by Sri lankan Government where victims are from 4 Generations of a single family and now no one from that family exist to tell their story or seek  justice ( Annex 04 ).

“War Without Witness” will continue to update this report and if you have any evidences, photos & details please email them to  WitnessDesk@WarWithoutWitness.com